Yesterday I recieved an email regarding a post I wrote last May, about a mummy interred at the church of St James Garlickhythe, in the City of London. Referred to as ‘Old Jimmy Garlick’, no one knows who he really is. As a student in 1982, I took a photograph of this poor fellow. 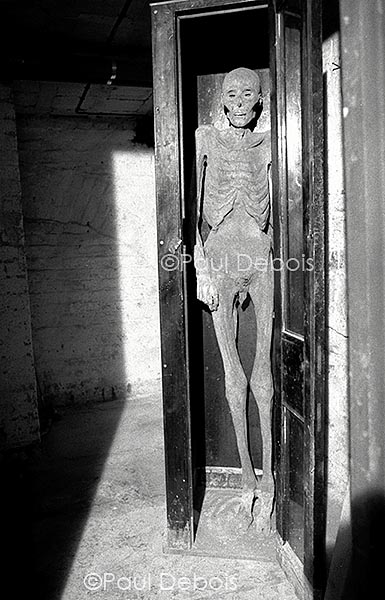 I wasn’t sure what happened to the body after my visit, but apparently sometime afterwards, he was placed into a modern casket with a bit more dignity than a glass fronted case. This was kept in the bell tower. Unfortunately due to new bell ropes being installed after the recent Diamond Jubilee, Jimmy needed to be moved again, hence the email. No recent photograph was available to include in a history of the church. 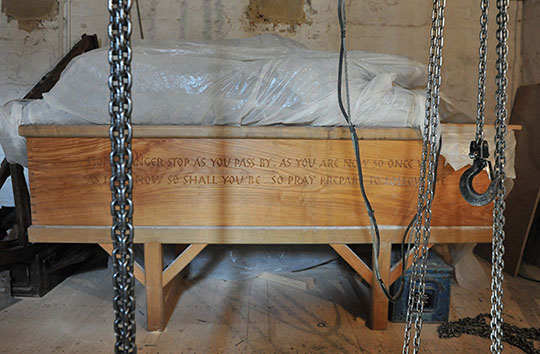 I’m glad he now appears to have a permanent resting place. As said in the previous post, he was stored in the crypt in 1982, and was an unwelcome spectator of  builders working beneath the church. They moved him into a dark corner, face to the wall, so he couldn’t watch them!. I was asked to move him back to a position that was more suitable for a mummy – ie not damp! Moving dead bodies around is an odd thing, but strangely, there was absolutely nothing spooky about this at all. In fact ‘Old Jimmy’, close up,  almost had a smile as he wobbled in an undignified manner, whilst I dragged the casket bit by bit into the middle of the crypt!.

Thanks to John Sutton from St James Garlickhythe, for the photograph, and for the new information.

On Friday I visited the Tate Modern to see the Miró exhibition. As I left Mansion House Station en-route to the gallery, I noticed that the small lane by the exit was called Garlick Hill. This reminded me of one of my earliest shoots, carried out in 1982. I had been asked to take some shots of a church, St James Garlickhythe, which is situated at the foot of the lane. It is still one of the oddest jobs I have undertaken. 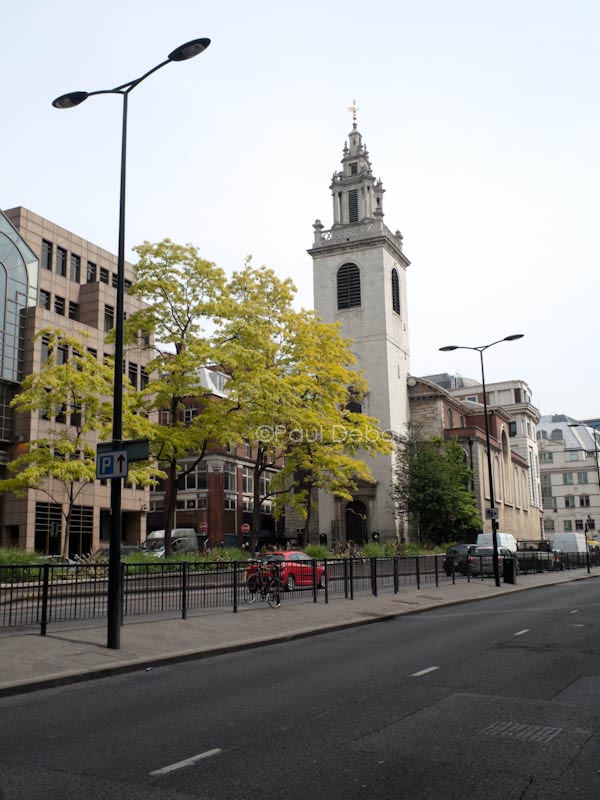 I had to take shots of the church interior, and whilst being taken round the building, my escort said, “When you have finished that shot, I’ll take you to see the body”. Not normally an invitation I’d hang around for, but the body in question was that of a poor fellow on display in a glass fronted case. I was more surprised the body was still in the church, as all information at that time indicated he had been reburied as his existence attracted ghost hunters. Nobody really knows who he was, and over the years he has acquired the unfortunate name of Old Jimmy Garlick.

Jimmy Garlick or Old Jimmy Garlick, a naturally desiccated mummy of a man in a wooden cabinet in the church of St. James Garlickhythe, a Wren church on Garlick Hill in the City of London.

After finishing my shots, I was asked to move the case containing Old Jimmy back into its correct position. This I duly did. Apparently some builders, who had been working in the room had moved it, as they didn’t like him ‘looking’ at them while they carried out their business.  Far from feeling spooked, my only reaction at the time was to notice the condition of his teeth!

I’ve no idea of his whereabouts now, but I hope he is still safe and sound inside the church, where he has probably been for at least three hundred years.